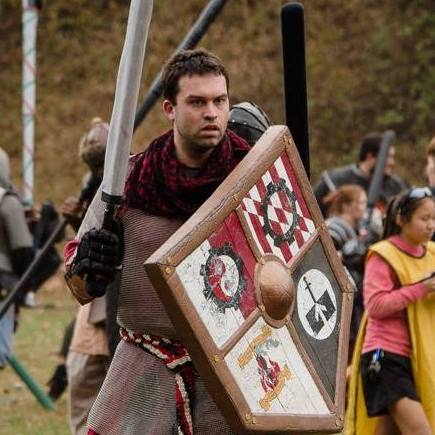 The first day of military training exercises to prepare the people of the land for war came to an end. The citizens of Darkon responded positively to the “capture the flag” exercise, and military advisers of all the Darkonian nations are in agreement.

The second day of exercises will be a mix of different “ice breaker” battle simulations ranging from Ditch, to King Maker, to Unit Battles. This event will take place on January 26th on the field of Burtonsville with lay on beginning at 1:00PM.

In other news from the recently concluded first day of battle exercises, there was one significant event that stood out. Another contender has risen to make a claim for the crown of Darkon, which will be decided at the annual Bellum Aeternus happening April 15-19.

Duke Kai Firebrand (pictured) has publicly announced his intent to vie for the throne, though the announcement came with a set of conditions. It has long been the standard that only Princes can make claims for the throne. Under this standard, it would appear that the Duke would have to win the Spring Noble Tournament (happening April 5th) in order to achieve the title of Prince.

With these exciting revelations, who knows what will happen at the next event happening January 26th at Burtonsville? Don’t miss it!