It is said that he was a child nearly alone in the world, with a mother on her deathbed and no means to a peaceful end. He was a dutiful child. He would sit with her as she slipped in and out of consciousness. The local dog-leech said she was beyond help; all he could do was ease her suffering. But without any money she would suffer… badly, thought the child.

The child begged for monies on the fabled high arched streets of Tarimstahd, a few kind souls dropped coppers, but mostly he was met with cold indifference or worse. He would never have enough in time, each day she slipped deeper into an excruciating nightmare.  There was another way, there had to be another way.

The child took to the streets, looking for loose purse strings, unattended parcels; whatever he could get his hands on. Day after day he worked his new trade, never obtaining enough, barely getting away more than a few times.

Finally the time had come; he saw an old jewel-smith in his shop, his attention on the noble woman attending his wares. A few choice pieces had been laid out on the far counter. If only he could get his hands on one of them, his mother would be peaceful, she could finally be allowed a dignified death. He crept closer, keeping an eye on the passersby and the shopkeeper. Step by step, closer and closer, until he stood a mere arm’s length away. With a final breath, he steadied himself and lunged, only to have a hand clamp down on his wrist.

Overcome with surprise the child yelped, quickly jerking back to see his assailant.

“Harris we have us a small problem here sir”, said the newcomer while holding the child by his arm.

Harris quickly turned to see the commotion. “My dear lady, I am so sorry for this complication, I shall have this street urchin removed at once. Please continue to look over our wares, I shall be just a minute.”

Harris walked over to his assistant, “Take this damnable street rat elsewhere and teach him a lesson, while I try to get this grey haired harpy to buy something and stop wasting my damn time”.

The child was dragged deeper into shop, and finally out back. “You’re gonna learn something here boy, you gonna learn not to steal from your betters, and when they see you they will know it too”.

The child was dragged by the arm, in the wake of the larger store attendant, directly to the forge. The initial heat hit him like a physical presence, but it was nothing compared to the unbelievable agony, the searing, disorienting torment of his hand as it was pressed into the furnace. The smell of burnt flesh filled the room, what should have been a few seconds felt like a lifetime of unbelievable agony.

When the child awoke in some alley, he was a child no longer, his innocence stolen and yet replaced with a cold iron core. Cradling his disfigured hand he made his way back to his home. It didn’t take him long to find their hovel in the poorest district. The entire way home he was silent, stifling any screams that threatened to spill from his lips. Not until he passed the threshold of his home did he finally speak a word.. “mother…. Mother!”. Silence was his only answer. He made his way further into the home, towards the bedroom, in silence as if he were but a ghost in the memory of his old home. There upon the bed was his mother’s still form, she had passed, and the agony and terror etched on her pallid face bore testimony to the nature of her end.

If only he had gotten the jewelry, if only he had done something earlier… A steely resolve settled over his diminutive form. No more, NO MORE, he vowed.

And thus was born The Black Hand. 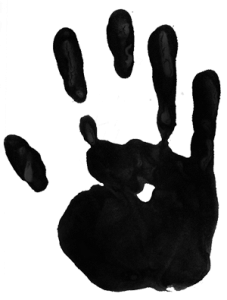