(Naples) With a major motion picture portraying Pompeii in theaters now, a new discovery is sending shockwaves through history and archaeological circles. It is only somewhat related to Pompeii though. It has to do with one of the most iconic images of Alexander the Great, created during the Roman Era, and found in the House of Faun in Pompeii. The original is preserved in the Naples National Archaeological Museum and is believed to depict Alexander the Great in battle with Darius III of Persia at the Battle of Issus.

“Well, we knew this Pompeii movie thing was going to be a chance for us to get the general public to take an interest in our history,” said a curator of the museum who wished to remain anonymous. “So we have been looking around for any items that maybe we haven’t displayed before – to do a special exhibition. You know – get the families out. That was when one of my assistants found the bag of tiles in one of our basement storage areas. It was a bag marked ‘Article 717D – extra tiles.’ Now ‘717D’ was what ‘The Alexander Mosaic’ was referred to before it was ‘The Alexander Mosaic.’”

The bag had been forgotten after its contents could not be placed in the mosaic by the original restorers. There were some notes found that indicated that ‘the colors were unnatural’ and the placement ‘did not make sense.’ So they were simply stored as extras. When they were rediscovered recently, a local university lent use of a high-tech scanner and advanced software to determine where the tiles should be placed. Those placements have drawn interest and criticism from across several academic communities.

“This may not be Alexander and Darius III at the Battle of Issus at all,” the source continued. “There has long been a debate as to why Alexander himself was attacking and spearing Darius’ brother Oxyathres. If we are to believe the tiles now … Oxyathres had some kind of ball of fire in his hand … and had a hoop of gold hanging around his neck …” 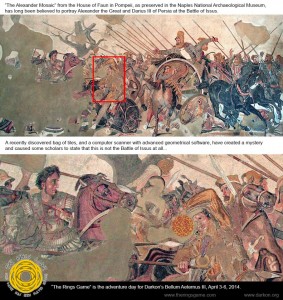 THE RINGS GAME is this year’s Bellum Aeternus III Adventure, to take place Thursday night and all day Friday of BeAe III.