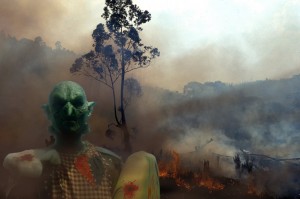 Clan of the Orange Hand

Child of a goblin mother and orc father, Draz hails from a dismal swamp in Darkon known as the dankwood. A member of a ragtag group of goblins and orcs called “the clan of the orange hand”, responsible for brutal raids on human settlements in that area,  he never ventured far from the Dankwood. But after the warriors of the realm descended on the Dankwood, and brought a rain of blood and fire, Draz and his clan mates are on the move! Rumor is there headed for the civilized parts of Darkon… rumor is they’ve got the name of a particular Noble on there lips and rumor is there not leaving without his head!