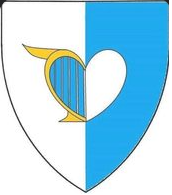 Tall for a half-dwarf, and never short on tales and songs, Radby Bardheart (better known as Radby the Bard) seeks to bring joy and mirth to those around him. As a bard, he longs to inspire others with tales of great heroes, and Radby seeks to learn as much as he can about the world around him. A preist of Hanseath, the tavern to Radby is as sacred as any church. It is in such places over mugs of ale, that stories are told and songs are sung. To unravel the mysteries of the world and tell others of these stories, that is Radby’s ambition.

Radby the Bard knows many tunes and with his trusty lute guitar he enjoys creating opportunities for Bardic circles around campfires at overnight events.

Outside of their role playing character, Radby the Bard has helped to host many events for the club, and has helped support the club in creating new award and recognition systems for honoring members of the club and their service to others. During the pandemic when Darkon in-person events were suspended, Radby facilitated numerous online DND stylized campaigns adventures, and other online events and contests for the community to help keep members connected during the 14 months that events were suspended. Radby hopes to serve this game and community to the best of his ability, and help to make it a place where people can feel included, safe, and welcome.