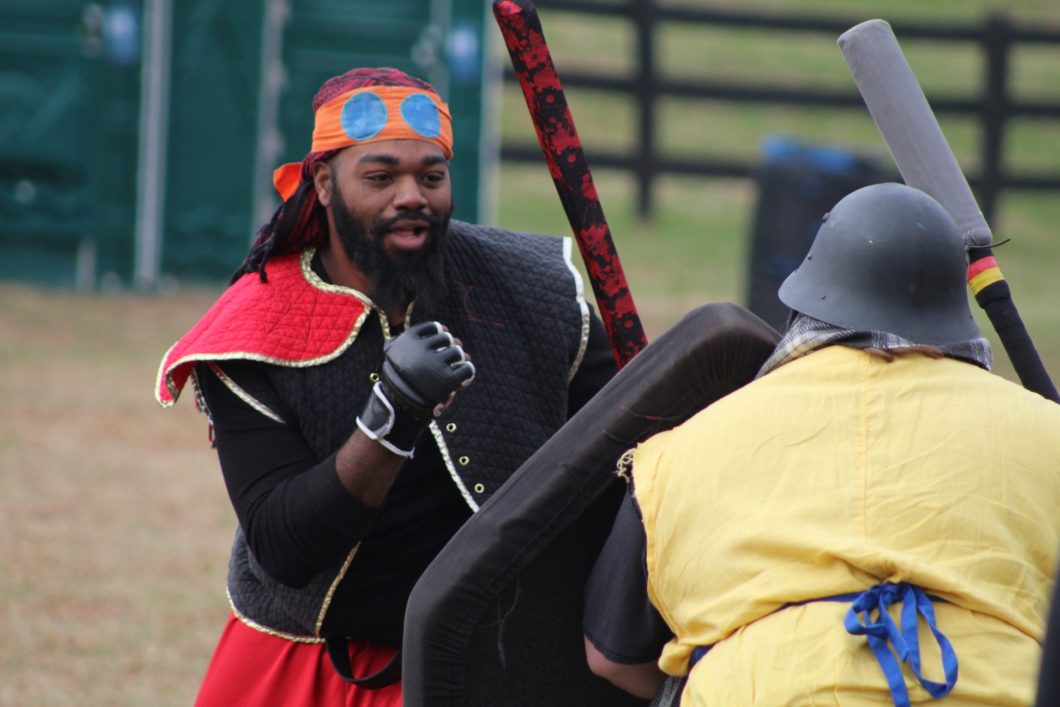 Welcome to the wild world of Darkon adventurer! If you’ve stumbled upon our game on the internet, been sent this way by players, or found us after running into an event in person, you’re in the exact right place.

Welcome to Darkon Crownlands. We are a live-action wargaming club that has been fighting for more than thirty years, and we’re stoked you want to join in the fun.

If you are 16 or older, you’re eligible to come to play with us. (However, if you are under 18 you’ll need a waiver signed by a parent or guardian at your first event) Your first event is free so that you can give us a try, but after that, you will need to pay dues.

Day events begin at noon with check-in from 12-1 pm. During this time you’ll check in with the secretary, pay dues, decide the class you’re playing that day, and get weapons, armor, spells, and garb checked before the fighting begins. These events cost $5. Campouts occur several times a year and cost $10 and run from Friday evening to Sunday morning.

Joining a LARP like Darkon can be a bit overwhelming, especially if you don’t already have friends who play. That’s where this handy guide comes in! Our aim is to give you a crash course on what to expect before your first event so that when you show up you’re ready to take in everything we have to offer!

Unlike the modern world, Darkon exists on a plane all its own. It’s a fantasy world which means you’re going to need the right clothing and equipment when you come out to an event.

Finding starter garb may seem difficult, but it doesn’t have to be. You have 3 events of mercy time before you’ll be penalized for not having garb. Basic garb can be made out of sweatpants, and a shirt with a belt. You can also find easy tutorials online for how to make your own.

If you’re willing to invest a bit of money in your kit right off the bat, there are always merchants willing to make you excellent garb. We suggest the likes of Badass Garb or The Dwarven Needle. You can also find great options at thrift shops, or make your own! Each person’s kit looks different and you’ll build onto it as you play, so don’t worry about making it perfect when you’re first getting started.

The most important thing with garb is to avoid anything that looks super modern. This means nothing with visible zippers, avoiding materials like jeans, and finding clothing that is easy to move around in. After all, you’re going to be running, fighting, sweating and moving around so finding the right fit and material for you is key!

Along with the clothing you wear you’ll also need weapons! At your first few events, you can take advantage of loaner weapons from the game, but after a while, you’ll need to get your own. You can order amazing weapons from the likes of Gorg the Blacksmith or reach out to other players who are selling weapons. You’ll learn about the different kinds of weapons at your first event and from there find the ones you want to fight with!

Part of the fun of Darkon versus some other full contact LARP games is that you’ll choose a class on your 5th event. Your class gives you specific skills that can be used during adventures and allow you to fine-tune the way you play the game.

There are a huge variety of classes from Fighters to Mages, and you’ll want to think hard about the type of class you want to play. If fighting seems like the most fun, then a combat-heavy class like fighter might be best for you. If Spells are up your alley, you might be better suited to a Mage. Of course, there are plenty of in-between options that mix both, and each class comes with its own perks, skills, and drawbacks. You’ll want to read the rulebook for information on each one before you choose.

If you find you’re not enjoying the class you picked, don’t worry! You can always check in as a different class next time. The more you play a class, the more credits you will put towards it, allowing you to level up and access new skills.

Darkon isn’t just about fighting although that is a core aspect of our gameplay. It’s also about role-playing, and here in Crownlands, you aren’t who you are in the real world.

You build a character that has their own name, might have a different personality than you and has never been to a place called the United States. All you need to start a character is a name.

You’ll want to avoid anything too complicated, as well as avoiding names like Arthur or other historical figures. While at Darkon this is the name you’ll use to play and interact with other folks on the field.

While you can have a more complicated name, you might want to avoid it. After all the other players will call your name so they can get your attention. With this in mind, we suggest no more than two syllables. You can have a longer name, but a shortened version is easier to call while on the field when your country members need to get your attention.

For instance, my full Darkon name is Az’Sirenythe Azuviir Silvertongue, but I go by Siren. Much easier, right?

Darkon is a full-contact game, and that means that at times you’ll be dealing with communicating the hits that you have taken from other players. We work on an honor system which, means that you call your own hits. However if you don’t let other players know when they have hit you, or missed you it’s easy for tensions to flare, and nobody wants that.

If someone lands a hit on you, call it. An easy way to do this is “good arm”, “good leg”. Once you’re confident in what counts as a hit versus doesn’t, this language evolves further. You might call “skim” if a shot doesn’t quite land, or let other players know if a shot isn’t given with enough force. You’ll also want to let the people you’re fighting know when you’re dead. You can call “dead”, take a knee, or put a hand on your head to denote this. It’s all part of good sportsmanship when fighting.

In your early days, it can be difficult to discern when you are supposed to die. There are different types of weapons that do different damage, as well as spells. If you ever get confused or take a hit and you aren’t sure if you’re supposed to die, then just take the death. This can be frustrating at first, but you’ll be back up in 5 minutes, and over time you’ll gain the knowledge about what each weapon and spell does to take the appropriate reaction.

If you are ever actually injured on the field what you will want to do is call out “Hold”. This is the sign that someone has been hurt out of game. When this phrase is called, all play will cease until either the injured player has left the field or it is clear that they are okay to continue fighting.

There are also a number of different hit zones for Darkon. All of them, as well as weapon types, will be discussed in depth during your newbie speech, but you can refer to the above diagram as examples of where the legal hit zones are.

While on the field if you ever have a problem you’ll want to speak to either an elder or a noble. Both are fairly easy to spot, even in the thick of things.

Elders are essentially referees. They will have a white sash or tunic that reads “ELDER” and it’s their job to ensure that the game is being played safely. If they call you dead, think of it as an NFL ref and follow their directions.

Nobles can be slightly more difficult to spot, but not by much. They often have much fancier garb, as well as a white belt. Nobles are veteran players of Darkon who are committed to making sure that the game is a safe place for everyone on the field.

Starting a new hobby can feel intimidating, and that’s true of Darkon true. But, don’t stress yourself out! We WANT you to come to play and we try to be welcoming. While it’s true not everyone is going to be super friendly, you have plenty of options!

At your first few events, you’ll attend a Newbie Speech. This is a time where you’ll meet nobles of the game, learn about rules, and meet other players who are just getting started. It takes time to learn everything going on at Darkon, but we know you’ll catch on soon enough.

You can also join up the Realm’s Guard. This is a faction of new players who band together at events and work as a unit when fighting. It lets you find new friends, have people to fight with and avoid feeling cliquey right off the bat. Remember, this is a social hobby and the more you talk to folks off the field and fight with them on the field, the more fun you’re going to have.

We can’t wait to welcome you officially at your first event but until then you can connect with us on Facebook!