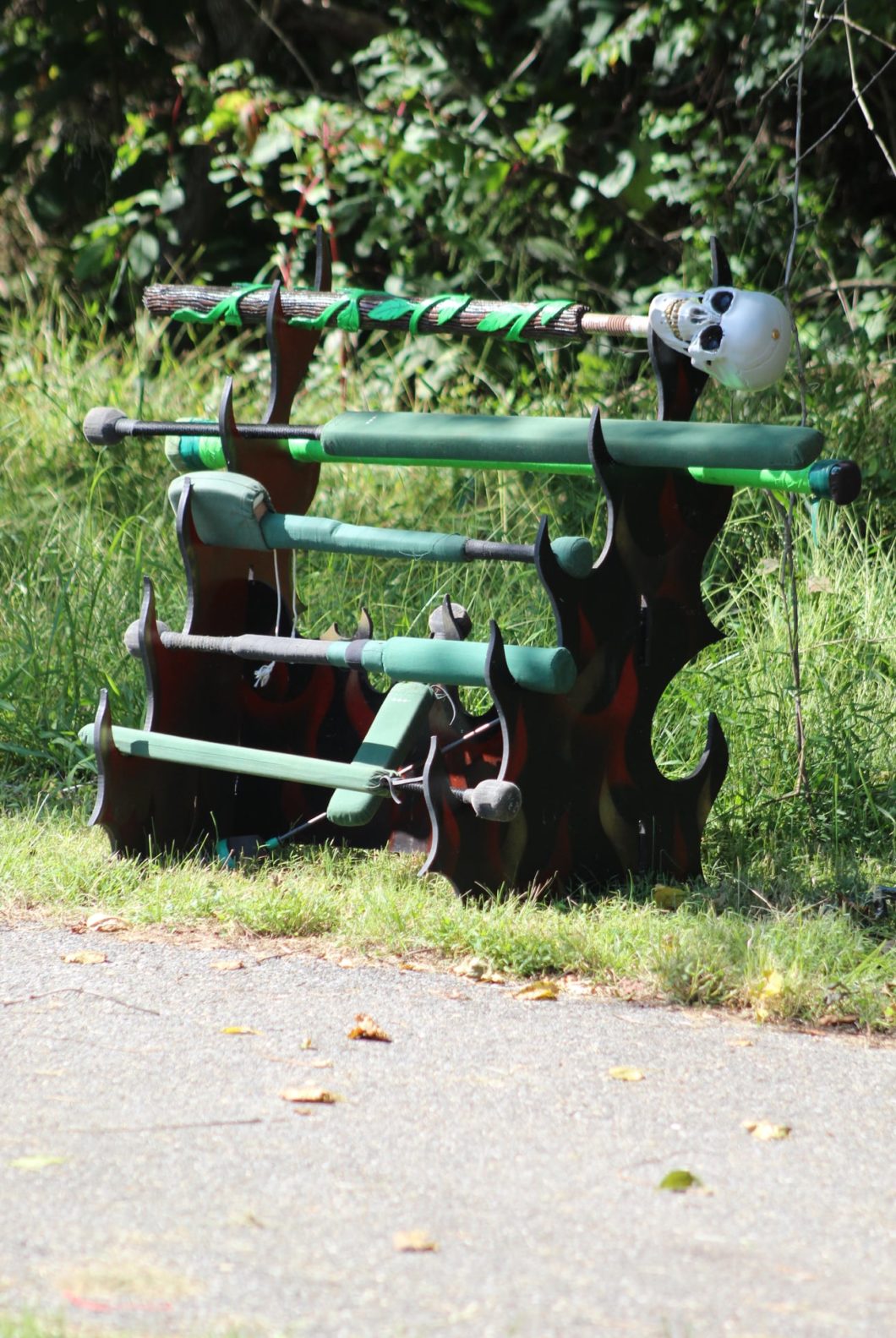 This book is a history of the powerful relics known to exist in the land of Darkon. (Out of character- the color Green in Darkon on shields and weapons is restricted- only the relics can feature this color and they are powerful artifacts). Here you may learn more about these items.

There are several items of renowned power in the world of Darkon known as Relics. These magical artifacts are priceless, and several of them date back to the early years of civilization. Many of these Relics have been missing for centuries, but will undoubtedly surface as time goes on.

Relics must be in play at all times, unless damaged and removed for safety reasons. This does not affect Relics lost during a land search (see Chapter Eight: Land Rules). If a Player dies in possession of a Relic, they may not keep it with them in Hades; the Relic must be left where the Player fell unless the Player dies in some remote location, like the middle of the woods. In this case, the Relic may be given to an Elder to distribute, but may not be kept by the dead Player.

A living Player may take a Relic to Hades or an Elder, at the Elder’s discretion, for recharging, at a cost of 4 minutes per
charge. The Bracers of Defense, for example, would take 12 minutes to fully recharge. During multi-day adventures, such as campouts, Relics automatically recharge at dawn of the next day.

All Relics are club property, and will be collected at the end of each battle day, or when the adventure is over in the case of multi-day adventures, to ensure that they are present at the next event. Relics are not to be taken home with any Player without the express permission of the Relics Marshal. The Relics Marshal will keep a log of which country possesses each Relic. The Relics Marshal will distribute the Relics at the beginning of each event to the country who rightfully possesses the Relic. If a Relic is not claimed at the beginning of an event, it is forfeited. Forfeited Relics will be distributed randomly. Relics are noticeable by their bright green color; Relics must be visible at all times (i.e. Players may not hide them in their clothing, pouches, etc.).

The Sword of Slaying
This Sword was forged by the Dwarves of Thorin Rock, at the request of their great leader, King Sulto VI. King Sulto needed this blade to defeat a fire-breathing dragon that had invaded the Dwarven stronghold in search of gold. The Sword was thought to be lost when a group of marauding Orcs raided the stronghold later that year and killed King Sulto; but has since been found. The blade is finely constructed and very light, exhibiting the vast skill of the Dwarven weaponsmiths. Although it is the size of a short sword, this Sword does the damage of an enchanted greatsword (i.e. magic black damage) when swung; this Sword does magic red damage when stabbing.

Dogtooth
Legend has it that this dagger was crafted from the canine tooth of a massive blink dog. Some remnant of its former owner’s extraplanar nature allows this dagger to easily “blink” through armors and magics as if they were never there. Dogtooth pierces all armor and skins and does magic red damage. Players should say “piercing” when attacking with Dogtooth to indicate its effect.

Javelin of Lightning
The Javelin of Lightning is a javelin that dates back to the early years of the Skydwellers when the Realm of Darkon was still in its infancy. The Javelin is a throwing weapon only, and cannot be used for stabbing in melee combat. When thrown, the Javelin acts like a lightning rod. Once it strikes its intended target, it does magic red damage as if it were an enchanted javelin, then immediately calls down lightning and does a lightning bolt attack (as per the spell). It cannot be caught or deflected.

The Arrow of Piercing
This magical Arrow was fashioned by the Wood Elves of Tangle Forest. The Arrow will also pierce any armor, shield (except the Shield of Deflection, see below) or weapon, inflicting arrow damage regardless of AR. Shields hit confer an arm wound. The archer must shout, “Arrow of Piercing!” when the Arrow connects with its target to avoid confusion.

Staff of Healing
The Goddess Clarrisal imbued this Ceremonial Staff with magical healing. Any healing character type holding this Staff must only read half of their spell length to cast any healing spell. The Staff’s power may be used as often as desired and does not need to be recharged. Clerics, Druids, Rangers, and Cavaliers may use this artifact. This artifact does not work in conjunction with the Fighter ability First Aid or the Monk ability Cure Light Wounds.

Wand of Gartan
The evil Arch-Mage Gartan crafted this Wand to assist them in leading their armies to victory over the Kingdoms of Good. It has since been left to the hands of the inhabitants of the Realm of Darkon. The Wand is capable of 3 bolts of ‘Magic Missiles,’ which inflict black damage, but do not destroy shields. Black spell balls symbolize these bolts, either those accompanying the Relic, or those of a Mage. Only Mages may use this Relic. To invoke the power, the Mage must say, “I summon the Magic of Gartan!” and then throw the bolt at their target while pointing the Wand in that direction; failure to declare the incantation line will result in the spell not going into effect. After the 3 bolts have been expelled, the Wand’s energy is depleted unless recharged by a Mage, in Hades, or at the discretion of an Elder.

The Brooch of Shielding
This Talisman was crafted by Gnomish Jewel smiths for Kylack Kor, King of the fierce Saavok Nation. The King used the
Talisman to protect themselves from magic-using contenders of their throne. Anyone wearing this powerful amulet is
unaffected by magic spells and the magic of certain weapons. All existing magical conditions of the wearer are temporarily nullified while the Brooch is worn, including Stone Skin, protective spells, Barkskin, etc. All weapons, including enchanted, Holy, and other Relics, that come in contact (i.e. hitting the wearer or in the possession of the wearer) function as normal weapons. If the Brooch is removed, all spell effects on the wearer and their possessions at the time the Brooch was donned return to the state they were in when the Brooch was put on. Spellcasters may not cast any spells while in contact with the Brooch. The wearer is also immune to healing magic and must remove the Brooch to be healed by magical means. The Brooch must be worn openly and visibly at all times. The Brooch’s power is used as often as is necessary and never needs to be recharged.

Maelstrom
This mighty two-handed sword was first used by the frost giants dwelling in the frozen wastes above Valdimar. The
Maelstrom functions as an enchanted greatsword, but dealing three points of slashing damage instead of the two points dealt by standard black damage; Maelstrom does magic red damage when stabbing. Due to the unwieldy nature of the frost giant weapon, it must be wielded at all times with both hands. In addition to having the ability to deal increased damage, the Player in possession of The Maelstrom is immune to all cold and fire-based attacks and effects. When striking a Player with The Maelstrom, the wielder is to announce “Maelstrom!”.

The Mace of Disruption
This Mace is a powerful, one-handed weapon forged by the High Priests of Minathian. Its enchantment can wreak havoc upon Undead enemies. In the hands of any Player permitted to use a mace, it functions as an enchanted mace. However, in the hands of a Cleric, it grants the wielder special powers. When swung with one hand, the Mace enables the Cleric to destroy shields with three solid blows. When struck against the Undead, it is considered a Turn Undead spell, see Chapter Seven: Spells and Magic. The Mace of Disruption is not a head legal weapon.

Ravenswrath
Ravenswrath is a one-handed, single-bladed axe forged by the priests of the war goddess Morrígu to drive back the Fomorian army of Balor of the Evil Eye. It was last lent the great hero Cúchulainn but was again lost when he was slain by Lugaid mac Con Roí. Ravenswrath deals magic white damage when swung and magic red damage when stabbing. In the hands of a Fighter, the axe destroys shields with three direct blows (two for bucklers) and allows its wielder to stand tall against giant-sized Players and creatures. Any class capable of using white axes may use Ravenswrath.

Long ago, Harmony the Bard of Ages befriended Death and bestowed to him a magical lute as a token of their friendship. That friendship came to an end when Harmony snuck a fallen hero out of Hades. Angered, Death ended his friendship with Harmony and cast out the Lute that was gifted to them.

Because of the relationship the relic holds between death and Harmony, the relic may only be wielded by Necromancers and Bards. The relic has 4 abilities:

1. Remember Life: A holder of this item (while still living) can freely walk into hades and can invoke a special power by stating “Remember Life” that will allow a single body in hades of the users choosing to remember the last five minutes of their life with clarity when they resurrect from Hades. There is no limit to how many times this may occur.

2. Speak with Dead: They are also (at elder discretion) skilled at speaking with dead beings they may encounter in the world, to also include dead players and also creatures like ghosts and mummies. This ability works similar to the ability “Speak with dead” and is instacast by stating “Speak with dead special”. This ability can only be used 3 times a day by the same caster.

3. Ultimate Sacrifice: The holder of this item may choose, of their own volition (and while still living) to carry the item into Hades or on a battlefield (only if the player has not moved to hades or respawn) and swap with them to take their place- when using this ability the user declares “Ultimate Sacrifice”. If the individual being swapped with was already in Hades the user assumes whatever time left they had in Hades. When this act is performed the user loses possession of the relic as if they had died. The relic would be set outside of Hades if a swap occurred there. If switching places with a body on the battlefield the relic is left where the body was found. The individual resurrected by this means regains full memory of the last 5 minutes of their life.

4. Deaths Grasp: The lute cannot be freely traded once in a Bard or Necromancers possession, and can only be relinquished by the death or sacrifice of it’s owner

Safety Note: This relic is not a weapon that can hit others. It is however designed safe enough to carry onto the field.